There’s much more to working from home than setting up a video conference.  We need creative ideas to keep people employed who have jobs that aren’t conducive to working at home.  Flexible work arrangements are important to explore. 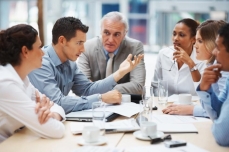 A colleague told me just today that a client paid for him to travel to have face-to-face meetings because they believed the results were much higher quality than phone meetings. After he flew all the way across the country for a few hours of meetings, he said it was worth it to get that extra level of interaction.

We often take advantage of current technology to communicate

instead of making the effort to get together face-to-face. Even talking can be too much effort. People have told me on multiple occasions that they prefer texting to talking on the phone. But we are missing out on a lot of information when we interact via technology. Some situations benefit greatly from good old face-to-face interaction. Building trust and resolving conflict are two such situations. It may be inconvenient—and expensive—to get together in person, but the time and money saved in the long run is well worth it.

I interviewed a group of industrial design engineers at a multinational company to find out why they preferred to meet face-to-face, even when it involved international travel. The engineers said there were many benefits of meeting face-to-face. These included:

Some people think old-fashioned communication skills are not needed in the modern world. But don’t forget that people are people. We still need to interact, understand, and connect with each other. For all these reasons and more, it’s a good idea to hone your face-to-face communication skills.

It’s really becoming clear how unhealthy it is to sit at your desk all day and type on your computer. “Sitting is the new smoking” I’ve heard on more than one occasion. Do I want sitting to cause me to have an endlessly miserable old age? Right in the center of middle age, I’m already starting to feel stiff and hear creaks when I get up after sitting for a long period of time. The writing is on the wall. It probably is for you too if you open yourself to the possibility.

What are the problems with sitting? Sedentary behavior is the biggest one—not moving can lead to weight gain, muscle atrophy, bone loss, and joint stiffness, among other things. On top of that, a seated posture puts pressure on your spine, squishing the discs into each other. Even worse is what bad posture can do to you. END_OF_DOCUMENT_TOKEN_TO_BE_REPLACED

This is a compelling story from the New York Times on how new shift scheduling technology (and corporate desire for higher profits) affects lower-level employees and their ability to meet demands outside of work.

Working Anything But 9-5: Scheduling Technology Leaves Low-Income Parents with Hours of Chaos

Please comment on your own experiences and suggestions for improvement.  Clearly, flexibility and even predictability are critical to employees.  They are fellow human beings, after all.

Taking two weeks off in itself is a great way to gain perspective on life. Traveling to another country is even better. I just returned from two weeks in Paris. During those two weeks I experienced a very different way of life. I was kept up till all hours of the night by the Fête de la Musique, an all-night music festival that takes place on the streets of Paris. I lost sleep because the fans of the World Cup celebrated on the streets too, by driving around with their horns on at 2:00 in the morning. During daylight hours, I was slowed down by traffic that was gridlocked due to protest marches and demonstrations and by strikes that delayed trains and planes coming in and out of Paris

None of that bothered me. Rather, I found it curiously intriguing. What bothered me–at least at first–was spending over a week without WiFi. The router in our apartment broke and the landlord didn’t seem to understand the urgency around fixing it promptly. I was planning to work while on vacation and was shut down. Public WiFi was no option. In France, free WiFi tends to be so slow it is unusable except for email—another curiosity. The French just don’t seem to have the same need for speed that Americans do.

What was I to do? Well, how about enjoy my vacation! I gave up worrying about work. I didn’t blog for two weeks. I stayed off Face Book and I hardly emailed. Rather, I immersed myself into French culture and leisure.

A funny thing happened. In more than one conversation, French people asked me why I was only on vacation for two weeks. They asked what else I would do during the summer for the rest of my vacation. I kept having to explain that this was my summer vacation and that I would be returning to work when I got home and that I was fortunate to be able to travel for two weeks because many Americans don’t have that kind of time. Now it was their turn to find my culture curiously intriguing.

Even if we only have 2 weeks of vacation per year, as compared to their typical 2 months of vacation, it makes all the difference in the world to get away from work for a while. It gives you perspective. Realizing that you’re dispensable, that the daily crisis at work really isn’t urgent or earth shattering, and that life has so much more to offer than work is truly important. Taking vacation helps to broaden your perspective and refocus your priorities in life.

As a consultant, I get an external perspective of companies. More often than not, I feel the office tension as I walk in. I see the desperate looks on executives’ faces as they try to do what they think the president wants. If the president decides he/she wants X, the executives send their teams into a frenzy to deliver X2. The executives advise me on what words to use or not use to appeal to the president’s idiosyncrasies. They demand that I turn in work proposals immediately and be available to perform without delay. They expect me to work after hours and on weekends like they do. I’ve learned my lesson because, when I do, they change their minds or the president isn’t available to look at it or the project gets canceled or something like that. We have all rushed around with elevated heart rates and stress levels for no real reason.

Every time I return from vacation, I gain perspective and vow not to get sucked into this lifestyle when I return. Sometimes I succeed. If more of us took time out to relax and gain perspective, we would probably be much less stressed at work. I highly recommend giving it a try. If anything, you’ll be less stressed for a while. If it catches on, we might make the workplace a better place for all of us.

A scary trend is emerging for companies to ban flexible work. Don’t do it. As explained in last week’s post about following along the fads without thinking, this is a bad idea.

Why is this important? Because flexible work is inherent in today’s workplace. Some companies are trying to fight it, like Yahoo and Oracle, who have both recently implemented policies that ban working from home during business hours. This is a huge mistake.

Workplace flexibility increases employee engagement. According to a recent Gallup study, remote workers are more engaged than on-site employees, and they work more hours too. The study found that a blend of working remotely and working on-site produces the greatest amount of employee engagement.

On a more intuitive level, think about how the flexibility to work remotely has helped you and your organization. For example, how many people call in sick anymore? More often, they work at home when they are sick instead of taking the day off. Keeping the germs out of the office saves the whole team from getting it. People also increasingly work while on vacation. I don’t advocate this practice in general because I firmly believe that people need to take breaks, but if they are managing to balance their lives in this way, I support them.

When I was a professor and I had a baby, I made a point to spend time with my baby during the day when I could and work in the evenings and on weekends preparing my classes. Instead of 9-5, 5 days a week, I worked 7 days a week at various times. It was a great solution for me at the time and I was very effective at work. For example, my students loved it that I responded to their emails at night and on Saturday.

Now that my daughter is older, I still work flexibly but do other things, like exercise or meet a friend for coffee during the day. I still spread my work around at night and over the weekend because that suits me well. I mention this to make the point that flexibility is not only about family. People take advantage of flexible work to do many things, like go to the doctor’s and participate in hobbies. In San Diego, surfing is a way of life and there are numerous professionals who structure their work hours around the waves. I don’t know how good these folks are at surfing, but the ones I know are very effective at work.

Even if companies fight it, workplace flexibility is not going to go away. Technology has made it possible, global companies require it, and younger generations of workers expect it. Companies typically have two concerns about flexible work: (1) lack of control and (2) difficulty establishing a company culture. Both of these obstacles can be overcome with modern methods of managing and leading people. What these companies need to learn is that the workplace requires flexibility to keep up.  It’s better to embrace it than to fight it.